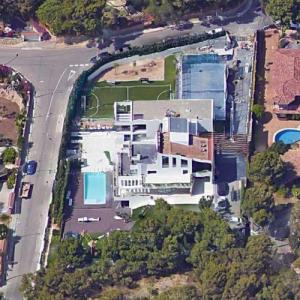 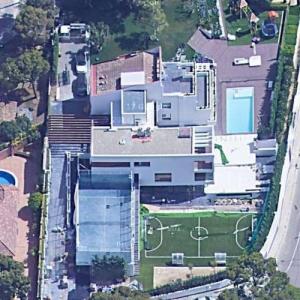 By BermudaBreeze @ 2016-10-29 06:32:27
@ 41.27213699, 1.95345587
Castelldefels, Spain (ES)
Lionel Messi, FC Barcelona Footballer lives in this large Mediterranian style Barcelona estate. The home was extended after the star purchased an adjacent villa. The grounds now include a small sized football pitch. Messi, who also plays for the Argentina national team, is often considered the best player in the world and rated by many in the sport as the greatest of all time. An international icon, Messi is known all over the world for his incredible soccer prowess. A specimen of supreme athleticism, Messi has crushed in on the field for years.

In 2009, the Argentinian bought an old house for €1.8 million, which would grow into this compound today. He has spent more than €6 million renovating. Now Messi’s house is a multi million dollar compound with its own football pitch. With views that overlook the beautiful Catalan hills and the Mediterranean coast, the home features a huge open terrace and large panoramic windows to soak in the sun. The house also has a gym. Quite the world class superstar, with precision skills.

Lionel Messi is the highest paid soccer player. Under his previous contract his base salary was $44.68 million. In 2017 he signed a new contract with Barcelona, and it pays a staggering $80 million. Messi earns an estimated $40 million from endorsements alone including his lifetime endorsement deal with Adidas. Between June 2017 and June 2018, Lionel grossed $111 million. Between June 2018 and June 2019, he earned a staggering $130 million.

Lionel has won the Golden Shoe and the Golden Ball. Messi has played in the World Cup and the Summer Olympics and many more games, with much success. He has acquired many awards and honors over his soccer career. Over his incredible career Lionel Messi has earned an incredible net worth of $400 Million.
Links: en.wikipedia.org
220,520 views