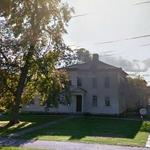 By Fab @ 2013-09-16 04:31:10
@ 41.744139, -73.188142
Litchfield, Connecticut (CT), US
The Litchfield Law School of Litchfield, Connecticut, was the second formal school offering training for the legal profession founded in the United States of America, after the William & Mary School of Law. It was established in 1784 by Tapping Reeve, who later became the Chief Justice of the Connecticut Supreme Court. By the time the school closed in 1833, over 1,100 young men from throughout the country had attended, many of whom went on to have significant influence on political, economic, and legal development of the United States during the antebellum period. Some of the school's most notable students include John C. Calhoun and Aaron Burr.

The law school, including Reeve's house, was declared a National Historic Landmark in 1965 as the Tapping Reeve House and Law School.
Links: en.wikipedia.org
557 views