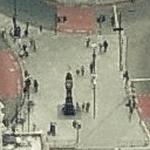 By adrbr @ 2008-03-08 13:46:18
@ 51.496488, -0.142783
London, United Kingdom (GB)
Little Ben is a cast iron miniature clock tower, situated at the intersection of Vauxhall Bridge Road and Victoria Street, in Westminster, central London, close to the approach to Victoria station. In design it mimics the clock tower commonly (though incorrectly) known as Big Ben of the Palace of Westminster found at the other end of Victoria Street.

Little Ben was manufactured, according to Pevsner, by Gillett & Johnston of Croydon, and was erected in 1892; removed from the site in 1964, and restored and re-erected in 1981 by Westminster City Council with sponsorship from Elf Aquitaine Ltd "offered as a gesture of Franco-British friendship".

There is a rhyming couplet Apology for Summer Time signed J.W.R. affixed to the body of the clock:

My hands you may retard or may advance
my heart beats true for England as for France.
А replica of Little Ben was constructed in 1903 in Victoria, a capital city of Seychelles.
1,348 views