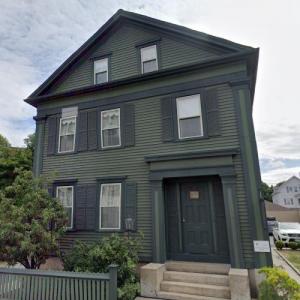 By jbottero @ 2013-06-29 10:52:26
@ 41.698965, -71.156386
Fall River, Massachusetts (MA), US
Lizzie Andrew Borden (July 19, 1860 – June 1, 1927) was an American woman who was tried and acquitted in the 1892 axe murders of her father and stepmother (Andrew Jackson Borden and Abby Durfee Gray Borden, Andrew's second wife) in Fall River, Massachusetts. The case was a cause célèbre throughout the United States. Following her release from the prison in which she had been held during the trial, Borden chose to remain a resident of Fall River, Massachusetts for the rest of her life, despite facing significant ostracism. The Commonwealth of Massachusetts elected to charge no one else with the murder of Andrew and Abby Borden; speculation about the crimes continues into the 21st century.

This home has been refurbished and is now a B&B where you can stay in the room of your choice.
Links: en.wikipedia.org
1,147 views