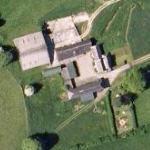 The 192-acre (0.78 km2) estate is near the village of Myddfai, Llandovery, Carmarthenshire; the Duchy completed its purchase of the property in March 2007. The three-bedroom farmhouse was converted into a residence for Charles, Prince of Wales, who is also the Duke of Cornwall, by Craig Hamilton Architects using traditional building techniques. It was once the coach house to the now ruined 13-bedroom country house of the Griffies-Williams family that stood nearby.

Charles and Camilla, Duchess of Cornwall, took up residence at the property in June 2008.
Links: en.wikipedia.org
6,023 views