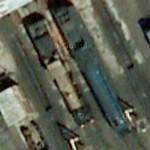 Normally it's located at York Railway Museum, but here at Didcot Railway Center it's as special guest train.