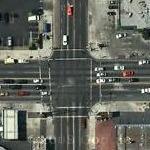 By jbottero @ 2008-09-27 13:24:22
@ 33.974611, -118.300349
Los Angeles, California (CA), US
During the LA Riots of 1992, Reginald Denny, a white truck driver who stopped at a traffic light at the intersection of Florence and South Normandie Avenues, was dragged from his vehicle and severely beaten by a mob of local residents as news helicopters hovered above, recording every blow, including a concrete fragment connecting with Denny's temple and a cinder block thrown at his head as he lay unconscious in the street. The police never appeared, having been ordered to withdraw for their own safety, although several assailants (the so-called L.A. Four) were later arrested
Links: en.wikipedia.org
3,982 views