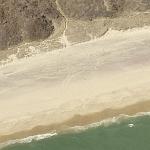 By tuttleberry @ 2010-11-22 22:52:37
@ 41.02588688, -71.96266529
Montauk, New York (NY), US
Approximate location at Montauk Beach where the mysterious decomposed creature named the Montauk Monster washed ashore in July 2008. No person or orginization has been able to positively identify what the creature actually is, although many approximate matches have been proposed.

Some people theorize that the creature is the product of genetic experimentation being done on animals at nearby Plum Island, who's true purpose has always been shrouded in secrecy by the US government.

It should be noted that there are 2 somewhat-conflicting main stories that were made public regarding the original sighting of the monster. The first story places the monster at Ditch Plains Beach, part of Rheinstein Estate Park, when it was first seen. The second story places the monster at Montauk Beach, near the Surfside Inn, when it was first seen. The two locations are about 2 miles apart from each other on the same contiguous stretch of beach. This map entry, of course, shows the Montauk Beach location.
Links: en.wikipedia.org
2,375 views