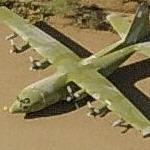 By kjfitz @ 2007-11-18 20:50:17
@ 32.138985, -110.870336
Tucson, Arizona (AZ), US
The Lockheed C-130 has been in constant production since 1954 giving it the record for the longest production run of any aircraft. The Hercules, or "Herk" was designed in response to a U.S. Air Force requirement for a turboprop powered tactical transport to replace the C-119. It has proved so successful that they are now in use with every branch of the American military and have served in the militaries of more than 50 nations. A total of 231 of the initial "A" model were built. Most went to the U.S. Air Force, but twelve of them went to the Australian Air Force. The Hercules has proven to be very adaptable and many have been modified for duties other than cargo carrying. C-130s have served as heavily armed gun ships, weather research aircraft, and with commercial airlines. As of 2002 the C-130J version is in production and "Herks" will still be rolling off the assembly line well past the aircraft's 50th anniversary.
Links: pimaair.org
606 views