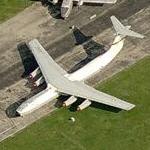 Afterward, 66-0177 continued flying missions around the world, and over three decades of service, the Hanoi Taxi flew more than 40,000 hours and underwent many changes. Originally built as a C-141A model, its fuselage was lengthened by 23.3 feet in the early 1980s, and the USAF redesignated it as a C-141B. Later, the aircraft had its wings strengthened, and from 1997 to 2001, all C-141Bs were converted to C-141Cs by the addition of advanced avionics. In 2002 the Hanoi Taxi received its final programmed depot maintenance, and it was repainted as it appeared when it went to Hanoi in 1973 -- except for the Red Cross. It flew in these markings for the next four years.

In May 2004 the Hanoi Taxi again tapped the timelines of history when Maj. Gen. Edward J. Mechenbier, himself a POW repatriated from Vietnam, flew it back to Vietnam to repatriate the remains of two American service members killed in action.

The Hanoi Taxi was retired to the museum in May 2006.
Links: www.nationalmuseum.af.mil
681 views