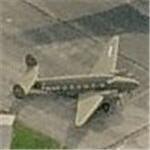 After the war, many military Lodestars were declared surplus and sold to private operators for use as cargo or executive transports. The C-60A on display was flown to the museum in 1981.
Links: www.nationalmuseum.af.mil
795 views