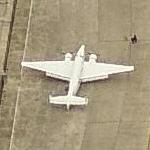 The prototype of lockheed 18, which first flew in 1939, was constructed from one of a batch of Lockheed L-14 Super Electras which had been returned to the manufacturer by Northwest Airlines after a series of crashes of L-14s. The fuselage was lengthened by 5 feet (1.5 m), enabling the fitting of two more rows of seats and hopefully making the aircraft more economical to operate. However, most US airlines were by then committed to purchasing the Douglas DC-3, and Lockheed found the Lodestar difficult to sell at home.

A total of 625 Lodestars of all variants were built.

Overseas sales were a little better, with 29 bought by the government of the Netherlands East Indies. South African Airways (21), Trans-Canada Air Lines (12) and BOAC (9) were the biggest airline customers. Various Pratt & Whitney and Wright Cyclone powerplants were installed.

When the United States started to build up its military air strength in 1940-41, American operated and part-built Lodestars were impressed for Army or Navy services under various designations. Lend-lease aircraft were used by the RNZAF as transports.

After the war Lodestars returned to civilian service, mostly as executive transports. Many of the New Zealand aircraft were later used for aerial topdressing.
Links: en.wikipedia.org
675 views