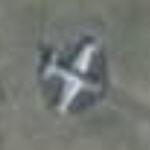 By kjfitz @ 2007-03-10 14:47:30
@ 37.366636, -120.580181
Atwater, California (CA), US
The Lockheed P-80 Shooting Star was America's first jet aircraft put into production. It was designed by the late Kelly Johnson, who would later be an integral part of the design of the U-2 and SR-71. In June, 1943 Lockheed was invited to design an aircraft around the deHavilland H-1 turbojet developed in Britain. The design team completed the project details in a week and the first flight took place 143 days later. The P-80 was considered the best Allied fighter at the end of World War II. It arrived too late to see combat, even though 45 aircraft were delivered prior to the end of the war.

The P-80 saw service in many roles with both American and foreign Air Forces. Its American designation changed in 1948 from P-80 to F-80. It saw combat in Korea, first entering that war in 1950. An F-80 is credited with the first jet-to-jet kill. During a dogfight on November 8, 1950, Lt. Russell Brown shot down a North Korean Mig-15 in his F-80. They were used mainly as fighter-bombers in Korea, with the F-86 taking over the high altitude interceptor role.

The aircraft on display at Castle Air Museum is painted in the markings of Lt. Brown's aircraft and the red star painted under the canopy marks the downing of the Mig.

Like most other aircraft, the F-80 also saw service in many other roles, such as reconnaissance. The T-33 trainer and the F-94 all-weather interceptor were both developed from the F-80.
Links: www.elite.net
772 views