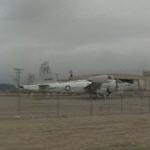 Although designed for land operation this a/c was flown from carriers. Successive models progressed from the from the P2V-1 to the P2V-7. In 1962 the P2-Vs were redesignated as P-2s. The P2V-s became the P-2 E and the P2V-7 became the P-2H.

The museum's a/c was at one time equipped with jet engines attached outboard of the regular engines. They were removed prior to being Donated by the Navy Air Reserve Detachment of Buckley Field CO.
Links: www.pwam.org
674 views