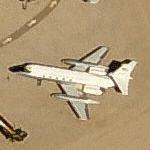 By kjfitz @ 2007-11-22 12:18:02
@ 32.139423, -110.866674
Tucson, Arizona (AZ), US
In 1956 the U.S. Air Force asked the aviation industry to submit proposals for low cost jet aircraft to replace its fleet of propeller driven utility transports and twin-engine crew trainers. Lockheed saw the potential for an aircraft to meet both the military requirement and the then emerging business jet market. The result was the four-engine JetStar. Initial proposals for a two engine aircraft had to be modified for four smaller engines when larger British made engines were rejected by the Air Force. Mounting the engines on the rear fuselage reduced cabin noise and lowered the risk of foreign object damage to the engines. Most of the JetStars in military service were used for VIP transport in both the Presidential Fleet and for senior military commanders. A total of 204 JetStars were built for military and civil customers in several countries.
Links: pimaair.org
663 views