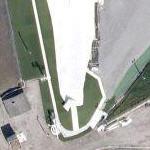 The surface system is made of a polymer composite, comprising a monofilament fibre and impregnated carrier layer. This sits on top of a shock absorption layer, giving an authentic responsive and reactive feel. Other components in Snowflex include an integrated misting system, known as BritonMist, for friction reduction and an impervious membrane for recycling of water. The base is a woven controlling layer which prevents earth movement. The surface layer is manufactured in tile form and as such Snowflex forms a homogenous system which can be cut and formed into complex features and shapes.

Following its launch in 1996 Snowflex has been installed in a wide range of slope operations.

Recent projects include the West of Scotland Ski & Snowboard Centre in Bearsden, Glasgow and the Loisinord Ski Centre in Noeux les Mines, in the Pas de Calais region in France.
Links: en.wikipedia.org
956 views