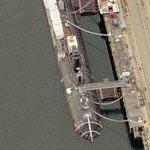 By kjfitz @ 2007-08-15 17:42:58
@ 43.080882, -70.744609
Portsmouth, New Hampshire (NH), US
The Los Angeles class is a class of nuclear-powered fast attack submarines (SSN) that forms the backbone of the United States submarine fleet, and is the most numerous class of nuclear powered submarine in the world. They were preceded by the Sturgeon class and followed by the short-lived Seawolf class and the Virginia class. Usually named after U.S. cities, the LA class broke a long-standing Navy tradition of naming attack submarines after sea creatures. The boats are also colloquially referred to as "688-class" subs, after the hull classification symbol of the first boat, SSN-688.
Links: en.wikipedia.org
1,396 views