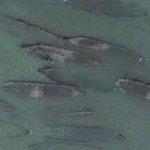 kjfitz
@ 2007-04-18 18:13:45
During World War I, a plan called for the building and launching of 1,000 wooden steamships to carry troops and cargo to Europe; however, by the end of the war, not one had made the crossing. Years later, at least 88 of the wooden steamships were sunk at Mallows Bay and in the decades since, have become an integral part of the natural ecosystem as artificial reefs. Today, Mallows Bay is recognized as the largest sunken wooden ship graveyard in the Western Hemisphere.

My favorite quote from the aarticle, "At 5 a.m., November 7, 1925, just before sunup, with government representatives, salvors and press hovering nearby and a lone biplane flitting about overhead, the greatest peacetime maritime coup de grace up to that time was administered. On a signal, 10 men raced about the decks of 31 ships touching flaming torches to oil-soaked waste."

Of 285 wooden EFC steamships built by August 1, 1920, at least 152 ended up in Mallows Bay within nine years. Today the remains of at least 30 percent of the entire EFC wooden steamship fleet still lie in the embayment, surrounded by derelict vessels of all kinds dating from the late 18th century through the 1980s.