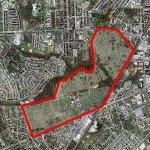 Veterans' graves distinguish Loudon Park. "Government Lot" was acquired by the Federal Government in 1861 for the remains of Union soldiers, 2300 eventually being buried there. An army sergeant domiciled in a cemetery cottage kept watch over the plot for many years. Some 275 Confederate soldiers were buried in a section designated "Confederate Hill." Burials began when lot holders donated plots in 1862, midway through the Civil War, the Cemetery subsequently exchanging these plots to insure a uniform section.