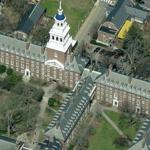 By kkeps @ 2010-09-20 18:41:14
@ 42.37141852, -71.11814272
Cambridge, Massachusetts (MA), US
Lowell House is one of the twelve undergraduate residential houses within Harvard College, located on Holyoke Place facing Mount Auburn Street between the Harvard Yard and the Charles River. It is officially named for the Lowell family but an ornate ALL woven into the ironwork above the main gate discreetly alludes to Abbott Lawrence Lowell, Harvard's president at the time of construction. Its majestic neo-Georgian design, centered on two landscaped courtyards, received the 1938 Harleston Parker Medal and might be considered the model for later Harvard houses nearby. Lowell House is simultaneously close to the Yard, Harvard Square, and other Harvard "River" houses, and its blue-capped belltower, visible for many miles, is a local landmark.
Links: en.wikipedia.org
761 views