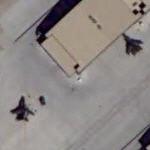 A second TTC unit, the Tornado Training Squadron, provides academic and tactical flying training, by German Air Force instructors, for German Tornado aircrews. The first contingent of Tornado PA-200 aircraft arrived at Holloman in March 1996. More than 300 German Air Force members are permanently assigned at Holloman to the TTC, the only unit of its kind in the United States.