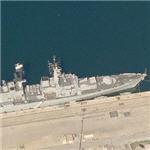 By kjfitz @ 2009-03-06 12:54:50
@ 40.473271, 17.262723
Taranto, Italy (IT)
The Durand de la Penne class destroyers are two guided missile destroyers operated by the Italian Navy. The design is an updated version of the Audace class destroyers but these ships are larger, have CODOG machinery and modern sensors. Initially four ships were planned but the second pair were cancelled as Italy had decided to join the Horizon project. They are unusually heavily armed, with a combination of artillery, missiles and torpedoes, that seldomly can be found in any other ship of this category.
Links: en.wikipedia.org
1,043 views