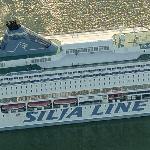 By Accagas @ 2008-02-25 16:44:36
@ 60.43470567, 22.21337894
Turku, Finland (FI)
MS Silja Europa, operated by Silja Line, is one of the largest cruiseferries in the world. It was built at Meyer Werft in Papenburg, Germany for the ferry operator Rederi AB Slite, a part of Viking Line. The ferry was already painted in Viking Line's colors and almost ready to be handed over, when the Swedish krona was devaluated by 10%, which led Slite into economical difficulties. Slite could not pay for the ship so Meyer Werft kept it and soon managed to charter it to Viking Line's rival, Silja Line.

The world's first floating McDonald's restaurant was located onboard Silja Europa from its maiden trip until 1996 when it was closed down and replaced by Silja Line's own hamburger restaurant.
Links: www.tallinksilja.com
2,323 views