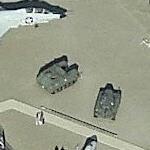 By kjfitz @ 2008-01-06 17:28:04
@ 42.87621, -78.879134
Buffalo, New York (NY), US
The M84 was the mortar carrier version of the M59. The mortar was mounted in the passenger compartment, facing the rear, and the rear roof hatches were reconfigured to include front, center, and rear hinged hatches, all of which folded to the front when the mortar was in use. The escape hatch in the rear ramp was relocated from the left to the right side, and the mortar ground mount was then stowed on the left of the ramp. (Global Security)

The M41 Walker Bulldog was an American light tank developed to replace the M24 Chaffee. It was named for General Walton Walker who was killed in a jeep accident in Korea.
Links: buffalonavalpark.org
927 views