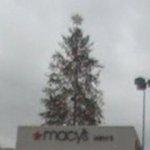 In 1994, the parent company of Rich's bought Macy's, and the stores eventually merged. The Rich's name was dropped in 2005, but the Christmas tree tradition now continues on the roof ot this Macy's store.
Links: en.wikipedia.org
866 views