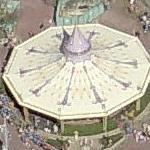 The carrousel was originally built by The Philadelphia Toboggan Company, one of the most prestigious carrousel companies, in 1917. In 1967, Walt Disney purchased the handmade carrousel (and horses) from the Olympic Park in Maplewood, New Jersey.
Links: en.wikipedia.org
1,156 views