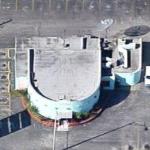 This club, Wilson's Sports Lounge, was used for the exterior shots of Xquisite.
Links: en.wikipedia.org
1,258 views