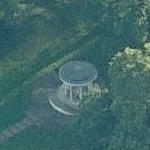 By kjfitz @ 2009-04-16 14:24:47
@ 51.444521, -0.566407
Staines-upon-Thames, United Kingdom (GB)
Situated in a grassed enclosure on the lower slopes of Cooper's Hill, this memorial is of a domed classical style, containing a pillar of English granite on which is inscribed "To commemorate Magna Carta, symbol of Freedom Under Law". The memorial was created by the American Bar Association to a design by Sir Edward Maufe R.A., and was unveiled on 18 July 1957 at a ceremony attended by American and English lawyers.

Since 1957 representatives of the ABA have visited and rededicated the Memorial renewing pledges to the Great Charter. In 1971 and 1985 commemorative stones were placed on the Memorial plinth. In July 2000 the ABA came:

“to celebrate Magna Carta, foundation of the rule of law for ages past and for the new millenium."
Links: en.wikipedia.org
1,717 views