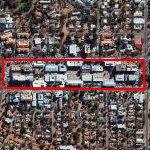 By boothy443 @ 2007-06-22 19:14:03
@ -24.65827, 25.916115
Gaborone, Botswana (BW)
This area was planned in 1963, in a preparation for Botswanas independence and was to be the town centre, located between the Railway Station and the Army Garrison. Today it is the heart of Gaborone with shops, banks, business offices, as well as walkway with people selling crafts and other goods. At the eastern end of The Mall is the Civic Centre that also houses a public reference library. Opposite the Civic Centre is the Pula Arch, a landmark that commemorates the Independence of Botswana.
1,560 views