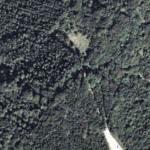 By giove @ 2010-11-04 13:08:52
@ 46.18995761, 13.3813839
Canebola, Italy (IT)
The Porzûs massacre (Italian: Eccidio di Porzûs) was en episode of the Italian resistance during late World War II, occurring on 7 February 1945. It saw the process and the execution of several partisans belonging to the Brigata Osoppo, a formation of Catholic inspiration, by Communist partisans of the Gruppi di Azione Patriottica. The event is still object of studies and controversies in Italy

On 7 February 1945 a group of partisans belonging to the Gruppi di azione patriottica (GAP), led by Mario Toffanin (codename: Giacca), reached the command of the Group of the Eastern BRigate of the partisan division Osoppo, near the malghe of Porzûs, in the comune of Faedis, eastern Friuli, with the goal to arrest and execute their members.

Toffanin accused the Osoppo brigade of being hindering the collaboration with the Yugoslavian partisans, led by Josip Broz Tito, of having missed to distribute to the other partisans weapons sent by the Allies and, above all, of having had contacts with the Fascist Decima Flottiglia MAS and Alpine regiment "Tagliamento", in the attempt to avoid the annexion of Friuli, Venezia Giulia and Istria to Yugoslavia.

According to the directives of the General Command of the Corpo volontari della libertà del Nord Italia ("Volunteer Corps for Freedom Northern Italy"), issued in October 1944, any pact with soldiers of Italian Social Republic (RSI) (the fascist puppet-state established by the Germans in northern Italy) was considered as treason, and thus to be punished with shooting. The brigade Osoppo had given shelter to Elda Turchetti, a young woman who had been listed by BBC radio as a German spy
Links: en.wikipedia.org
1,000 views