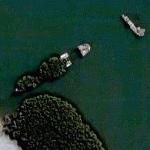 Ayrfield, built in Grangemouth, UK in 1912 was originally named Corrimal. It was renamed Ayrfield in 1951. She was sold for demolition in 1969 and her remains have been here since 1972.
Links: www.nswcanoe.org.au
896 views