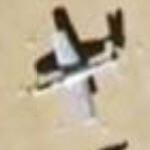 The F-84C “Thunderjet” is a single seat (pilot sitting ahead of the wing), straight wing, sub-sonic fighter. Production of the “C” model began in May of 1948. Features of the “C” model are its tri-cycle landing gear, wing tip fuel tanks, 6 x .50 Cal. machine guns, and the Allison J-35 turbojet rated at 4,000 Lbs. thrust. The ribbed canopy was retrofitted as an in-service modification; photos of F-84Cs, as built, indicate that early F-84s had clear canopies. In all, 191 “C” models were constructed.

The aircraft at the March Field Museum is serial number 47-1595. It was manufactured by Republic Aviation in Farmingdale, New York and delivered to the Army Air Force on 10 December 1948. It served in the Aerospace Defense Command and Air Training Command until retired in November 1953. Our F-84C was used at the Glendale College, Glendale, Ca., as a technical instruction airframe for 27 years before being donated to the March Field Museum in 1982. This aircraft is on loan from the USAF.

According to the Air Force Historical Research Agency (AFHRA/RSA), Maxwell AFB, AL, the museum’s F-84C has the following history: