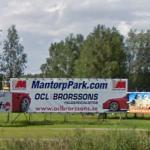 Mantorp Park is a motor racing circuit near the town of Mantorp in Mjölby Municipality, Sweden. The circuit was built in 1969 with finance from BP Sweden as a permanent road course and a drag strip. Mantorp Park is capable of 4 different layouts, but today only the short (1.950 km/1.212 mile) and long (3.125 km/1.942 mile) tracks are used.

The European Formula Two Championship visited from 1971 until 1973, and again in 1981 and 1982. Today it mainly hosts club events, dragracing, a driving school and rounds of the Swedish Formula Three Championship and the Swedish Touring Car Championship.