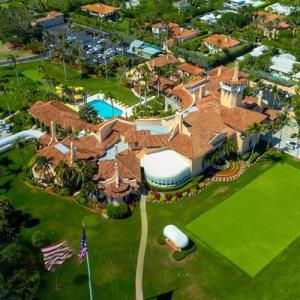 It cost $7 million dollars, an estimated $100 million in 2020 figures. The name Mar-a-Lago means “Sea to Lake” and refers to the width of the property, spanning the entire width of Palm Beach from the Atlantic Ocean on the East and the Intercoastal Waterway on the west. It was declared a National Historic Landmark in 1980.

It sat unused for years until Donald Trump bought it in 1985 for around $10 million. Trump renovated and updated the resort, adding a massive ballroom to the 62,500 square foot estate, which has 126 rooms, 58 bedrooms and 33 bathrooms, a spa and gym, and three bomb shelters. It sits on 20 acres, has a waterfront pool and five clay tennis courts, as well as a golf course. Its estimated value in 2018 was $160 million, and the worth has appreciated significantly since Donald Trump was elected president.

Not just anyone can stay at Mar-a-Lago; you have to be a member. There’s an initial $200,000 fee, plus about $20,000 in annual dues and taxes. The resort closes for hurricane season each year, as Florida’s summers are both hot and humid, as well as at heightened risk for tropical storms and hurricanes.
Donald Trump visits Mar-a-Lago frequently as president, and has hosted leaders from China and Japan at the residence. However, it is difficult and expensive to maintain adequate security to guarantee protection to foreign dignitaries as well as the president.

When Donald Trump turned the estate into a resort from a residence, he was required to commit to staying for no more than three non-consecutive weeks per year. However, Trump has indicated he will take up permanent residence there when he completes his time as president, whether that is in 2021 or 2025.
Links: en.wikipedia.org
25,326 views