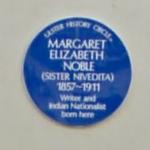 By adrbr @ 2011-10-01 12:36:34
@ 54.503869, -6.770173
Dungannon, United Kingdom (GB)
Sister Nivedita (1867–1911), born as Margaret Elizabeth Noble, was a Scots-Irish social worker, author, teacher and disciple of Swami Vivekananda. She met Vivekananda in 1895 in London and travelled to Calcutta, India (present-day Kolkata) in 1898. Swami Vivekananda gave her the name Nivedita (meaning "Dedicated to God") when he initiated her into the vow of Brahmacharya on March 25, 1898. She had close associations with the newly established Ramakrishna Mission. However because of her active contribution in the field of Indian Nationalism, she had to publicly dissociate herself from the activities of the Ramakrishna Mission under the then president Swami Brahmananda. She was very intimate with Sarada Devi, the spiritual consort of Sri Ramakrishna and one of the major influences behind Ramakrishna Mission and also with all brother disciples of Swami Vivekananda. Her epitaph aptly reads, Here reposes Sister Nivedita who gave her all to India