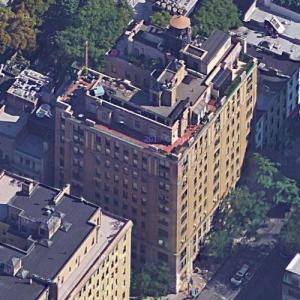 By mlc1us @ 2017-12-02 16:45:48
@ 40.7658274, -73.96606388
New York, New York (NY), US
Matt Lauer owns an apartment in this building. Lauer is a former American television host, best known for his time on the Today show and Dateline NBC. Well known to many American’s as one of the hosts of the yearly Macy’s day parade, and several Olympic Games, Lauer has since retired. His resignation came amid allegations of inappropriate sexual behavior, and ultimately Lauer's contract was terminated by NBC in November 2017. He denied any such allegations.

Laurer before his fall from grace was also a news anchor for The Today Show, anchor for WNBC in New York City and served as a local talk-show host and entertainment news segments for HBO. Now, Lauer has little credibility as despite his denial of misappropriate sexual behavior, the networks have reason to believe his most recent allegation was not an isolated incident.

Lauer lives in this 11 bedroom apartment in the building depicted. He purchased this massive New York apartment for $5.882 million in 2004. Though he has recently listed it at 7.35 Million. The two story penthouse is complete with a stunning view of manhattan. Key features include Marble bathrooms, a full library, and originals by Warhol.

As a common face on television until his nightmare allegations, Lauer has a net worth of an impressive $60 million thanks to his impressive career. Lauer is no stranger to legal battles however so that may explain his lack of cash. After a messy divorce, that was quite recent, amidst his allegations, in July 2019 it was revealed that Matt had agreed to pay his ex-wife a $20 million divorce settlement. A massive sum considering his total net worth.
Links: en.wikipedia.org, www.architecturaldigest.com
2,671 views