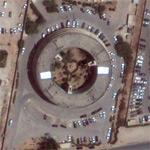 In November 2010, the airline was banned from European airspace by the European Commission Transport Agency, quoting "persisting deficiencies in its operations and maintenance".
Links: en.wikipedia.org
640 views