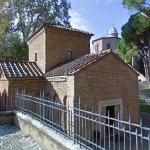 By WacoKidd110 @ 2012-08-07 14:22:21
@ 44.421112, 12.197157
Ravenna, Italy (IT)
The building was formerly the oratory of the Church of the Holy Cross and now contains three sarcophagi. The largest was thought to contain the remains of Galla Placidia (died 450), daughter of the Roman Emperor Theodosius I. Her embalmed body was reportedly deposited there in a sitting position, clothed with the imperial mantle. In 1577, however, the contents of the sarcophagus were accidentally burned. The sarcophagus to the right is attributed to Galla's son, Emperor Valentinian III, or to her brother, Emperor Honorius. The one on the left is attributed to her husband, Emperor Constantius III.
Links: en.wikipedia.org, virtualglobetrotting.com
669 views