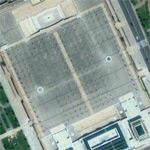 By neotrix @ 2011-01-21 07:48:37
@ 34.023156, -6.822048
Rabat, Morocco (MA)
The Mausoleum of Mohammed V is a historical building located on the opposite side of the Hassan Tower on the Yacoub al-Mansour esplanade in Rabat, Morocco. It contains the tombs of the Moroccan king and his two sons, late King Hassan II and Prince Abdallah. The building is considered a masterpiece of modern Alaouite dynasty architecture, with its white silhouette, topped by a typical green tiled roof. Its construction was completed in 1971.
Links: en.wikipedia.org
787 views