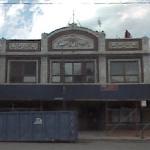 The Co-Ed Theatre closed in 1954 and from 1956 until 1977, it became home to a synagogue. In 1986, the building was converted into the Cobbler's Mall, which included, as the name implies, a shoe repair store.

In 2008, the Morse Theatre was renovated and restored, and reopened in October 2008 as a venue for concerts, despite an arson attack in August. Live theater, independent cinema, and children's programs are also planned. It reopened early-2010 as the Mayne Stage.
Links: cinematreasures.org
387 views