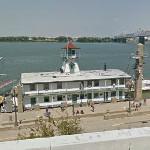 By WacoKidd110 @ 2013-09-16 19:05:11
@ 38.258867, -85.755152
Louisville, Kentucky (KY), US
Mayor Andrew Broaddus is a lifesaving station built by the United States Life-Saving Service located in Louisville, Kentucky, off the corner of River Road and Fourth Street. She is named in honor of Andrew Broaddus, a former mayor of Louisville. Her historic purpose was to protect travelers on the Ohio River from the Falls of the Ohio, with rescue crews for those who fell victim to the rapids. Louisville was the first place where a lifesaving station was placed in western waters. The first lifestation in Louisville was in 1881, with Mayor Andrew Broaddus as the third.
Links: en.wikipedia.org
443 views