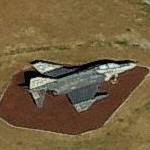 By kjfitz @ 2009-04-15 10:16:51
@ 35.344157, -77.965282
Goldsboro, North Carolina (NC), US
The McDonnell Douglas F-4 Phantom II is a two-seat, twin-engined, all-weather, long-range supersonic jet interceptor fighter/fighter-bomber originally developed for the U.S. Navy by McDonnell Aircraft.[2] Proving highly adaptable, it became a major part of the air wings of the United States Navy, Marine Corps, and Air Force. It was used extensively by all three of these services during the Vietnam War, serving as the principal air superiority fighter for both the Navy and Air Force, as well as being important in the ground-attack and reconnaissance roles by the close of U.S. involvement in the war.
Links: en.wikipedia.org
527 views