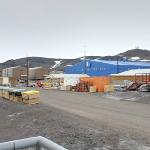 By Mike1989 @ 2012-07-18 02:42:34
@ -77.847132, 166.66833
Ross Island, Antarctica (AQ)
McMurdo Station is a U.S. Antarctic research center located on the southern tip of Ross Island, which is in the New Zealand-claimed Ross Dependency on the shore of McMurdo Sound in Antarctica. It is operated by the United States through the United States Antarctic Program, a branch of the National Science Foundation. The station is the largest community in Antarctica, capable of supporting up to 1,258 residents, and serves as the United States Antarctic science facility. All personnel and cargo going to or coming from Amundsen–Scott South Pole Station first passes through McMurdo.
Links: en.wikipedia.org, www.google.com
1,483 views