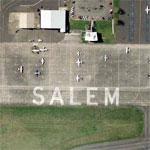 Primarily a general aviation airport, McNary Field has seen scheduled commercial airline service in the past. The Oregon Army National Guard - Army Aviation Support Facility (AASF) and charter flights also use the facilities. McNary Field serves as the home of the Oregon Department of Aviation and their Cessna 206.

The airport grounds include a control tower and a small terminal building.

Although the last scheduled airline flight left in 1993, Salem has actively campaigned to bring the airlines back to McNary Field. Beginning June 7th, 2007, Delta Connection will be returning commercial air service to Salem with two flights a day. The airport is planning to perform terminal improvements using a pre-constructed modular building.