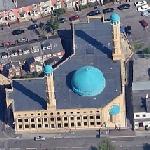 By Mike1989 @ 2013-04-08 01:49:00
@ 53.364182, -1.473278
Sheffield, United Kingdom (GB)
The Madina Mosque or Madina Masjid, also known as the "Wolseley Road Mosque", is the first purpose-built mosque in Sheffield, South Yorkshire, England. After some problems with funding, the project was completed in October 2006. Users of the mosque raised several million pounds to pay for the new mosque and Islamic centre which includes 19 rooms and two large halls, a library and a day centre. The project is estimated to have cost £5 million. The mosque was built on Glover Road, Sheffield, and intended to serve the Muslim populations of Nether Edge and Sharrow. It is hoped that the mosque will also unite local communities, and local feedback so far indicates this. The mosque's administration adheres to the Barelvi movement.
Links: en.wikipedia.org
406 views