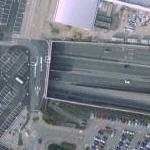 By kjfitz @ 2006-08-18 12:44:54
@ 51.400313, .533588
Chatham, United Kingdom (GB)
Built for Kent County Council, the £80 million Medway Tunnel provides a second road crossing of the River Medway at Rochester. The immersed tube road tunnel – only the second of its kind in Britain – was needed to relieve congestion on the Rochester Bridge upstream and ease traffic movement in the Medway Towns which are home to a sixth of Kent’s population.

Mott MacDonald’s involvement began when the Tarmac HBM joint venture appointed us as its designer to assist in bidding for the much sought-after design-and-build contract. All three firms had been involved in the UK’s first immersed tube road tunnel, the Conwy Crossing in Wales, and the addition of our extensive experience in tunnel and highway design helped produce a winning solution, both cost-effective and innovative.

The dual two-lane Medway tunnel comprised a 725m long twin-bore immersed tube with cut-and-cover approaches, the east bank preceded by a section of open-cut. Also included were around 800m of dual carriageway, an at-grade roundabout and slip roads to a grade-separated junction.
Links: www.mottmac.com
890 views