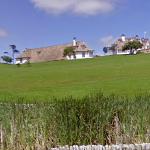 By kuressaare @ 2012-01-23 11:45:07
@ -36.726476, 174.662583
Coatesville, New Zealand (NZ)
Kim Dotcom (born Kim Schmitz, January 21, 1974), also known as Kimble and Kim Tim Jim Vestor, is a German-Finnish computer programmer and businessman who generated much publicity during the dot-com bubble and was convicted of insider trading, and embezzlement in its aftermath. He is also known as the founder of Megaupload and associated sites. On January 20, 2012, he was in the custody of the New Zealand police under charges of criminal copyright infringement related to the Megaupload site. He is known for his large frame as he stands 6 feet 6 inches (1.98 m) and weighs in at 285 pounds (129 kg).


Megaupload Limited businesses
On 21 March 2005, Schmitz founded Megaupload Limited, a Hong Kong-based file hosting and sharing business that eventually became the 13th most popular site on the internet with over 150 employees, US $175 million revenues, 50 million visitors daily, and estimated to be responsible at its peak for 4% of all internet traffic.

The business branched out into other file and media sharing, including image hosting and video hosting services known as Megavideo, Megalive, Megapix and Megabox as well as CUM.com (formerly Megaporn, Megarotic, and Sexuploader) which specialised in hosting pornographic content. (Megaupload itself also allows such content). Other services included Megaclick, Megafund, Megakey and Megapay, all of which were advertisement and financial services. Two additional web sevices, Megabackup and Megamovie, were in development before their closure.

The Megaupload business' domain names were seized and the sites shut down by the U.S. Justice Department on 19 January 2012, following their indictment and arrests of the owners for allegedly operating as an organisation dedicated to copyright infringement.
Links: en.wikipedia.org, virtualglobetrotting.com
6,401 views