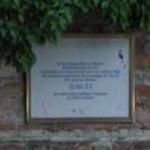 By Dania @ 2013-01-09 15:18:52
@ 52.489261, 13.385487
Berlin, Germany (DE)
The Z3 was an electromechanical computer designed by Konrad Zuse. It was the world's first working programmable, fully automatic computing machine. It was Turing-complete, at least in theory, and by modern standards the Z3 was one of the first machines that could be considered a complete computing machine, although it lacked the conditional branch operation. The Z3 was built with 2,000 relays, implementing a 22 bit word length that operated at a clock frequency of about 5–10 Hz. Program code and data were stored on punched film.


The Z3 was completed in Berlin in 1941. The German Aircraft Research Institute used it to perform statistical analyses of wing flutter.


The original Z3 was destroyed in 1943 during an Allied bombardment of Berlin. A fully functioning replica was built in the 1960s by Zuse's company, Zuse KG, and is on permanent display in the Deutsches Museum.
Links: en.wikipedia.org
559 views