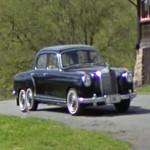 The form and body of the car changed little during its production run. However, in 1957, a year after the introduction of the 190 sedan the Mercedes star at the front of the car was made detachable: reports at the time indicated that this was either to pander to the requirements of certain export markets, notably Switzerland or to reduce the risk of pedestrian injury in the event of an accident.