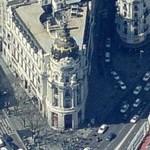 In 1905 the building of a new and important street Gran Via was confirmed and the former insurance company La Unión y el Fénix opened, to French and Spanish architects, a design competition for its new headquarters on the corner of this street.

French architects Jules Fevrier and Raymond Fevrier won the competition and started working on this project in 1907. Seven homes were demolished to facilitate the project. Spanish architect Luis Esteve finished the construction in 1910. The building was inaugurated on 21 January 1911.

The building is of very fine proportions with an impressive dome which is visible from some distance. Originally the dome was crowned with a phoenix in reference to the insurance company however in 1975, Metropolis bought the building and put a winged statue of victory in its place designed by Federico Coullaut Valera.
Links: en.wikipedia.org
698 views